It’s looking increasingly like Barack Obama is going to win the Democratic nomination for president. He’s got Iowa, is way ahead in New Hampshire polling (we’ll find out for sure tonight) and he stands to win the third primary in South Carolina. I’m not sure he’s stoppable after that. I think most Dems would be willing to rally ‘round any of the top three candidates (Clinton, Edwards, or Obama) but Obama looks like a winner and I think he’s going to sweep up most of the undecideds and fence-sitters because of that. And, baring any surprises, he’ll march on to victory in November.

So, I again ask if anyone is going to come up with an Obama walk of fame here in Springfield. 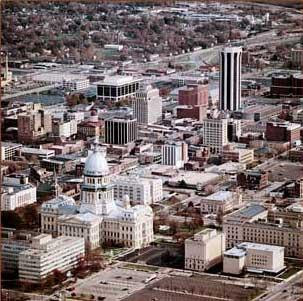 He spent a lot of time here (I assume) when he was a state lawmaker. And unless he brown bagged it, he had to have eaten out somewhere while in town. Maybe he even had a favorite restaurant. Surely those restaurants he did frequent are going to tout the fact that “Obama Ate Here”. Where did he stay while in Springfield? What other activities did he partake in here while representing his district?

Look, we aren't shy here about exploiting political celebrities. It’s time to gin up the Obama tourism machine. I offer this slogan free of charge: Springfield -Where Presidents Are Made!
Posted by Dave at 7:19 AM

I know it's probably a false memory, but having seen Governor Thompson, Governor Edgar, and Brenda, Dick Durbin, Paul Simon, several Mayors, the Culkin Family, several big name actors, television personalities, and rock performers standing in line at a local restaurant (which I worked at) I can say that I do recall having seen Obama in that line too.

This isn't going anywhere, but I thought I'd say that to impress everyone.

I seem to remember mention that Bento's was his favorite Springfield restaurant.