This story is just another example of how your own handgun is more likely to get you killed or injured, especially if you’re just plain stupid. And anyone out in the yard shooting a gun in an urban environment is stupid and dangerous.

I have no idea what happened when the police approached this idiot. I suspect the cops were a bit jumpy (understandably) and they may have been too cautious (if that’s even possible in this kind of circumstance). I mean, almost any move other than immediately dropping the gun could be mistaken as being aggressive. YOU DON’T FUCK AROUND WITH GUNS! This is especially true if the police have their guns drawn on you. 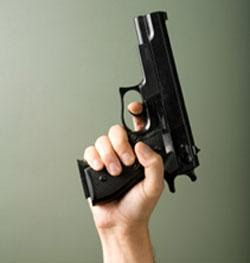 If you absolutely must have a handgun for “protection”, keep it in the house and only get it out when you are 100% certain that there is an intruder in your house who isn’t your 17 year-old daughter sneaking in late. And you sure as shit don’t go out launching bullets into the air to celebrate the new year. Anyone caught doing that should have their gun and FOID card taken away. Forever.
Posted by Dave at 11:47 AM

Several years ago a friend and his two young sons and I were celebrating the new year in another city. At midnite with our party hats on and kazoos at the ready we went out on the porch only to hear a volley of gunfire. We hit the deck and crawled back into the house. We heard it all, including what sounded like several machine guns. I have never understood firing guns in celebration and it seems backwards, old fashioned, and dangerous to me. Darla

Again, this is another example of a lack of gun safety education. If we taught gun safety in school, just like we teach drivers education, maybe we wouldnt have these idiots shooting guns in the middle of the night in the city.