I’ve been hearing a lot about this notion that depression and unhappiness hits those in their 40s the hardest.

People are most likely to become depressed in middle age, according to a worldwide study of happiness. The team of economists leading the work found that we are happiest towards the beginning and end of our lives, leaving us most miserable in middle years between 40 and 50.

The results, published in the journal Social Science & Medicine, showed that people's levels of happiness followed a U-shaped curve, a pattern that was remarkably consistent in the vast majority of countries the researchers looked at, from Azerbaijan to Zimbabwe.

For both men and women in the UK, the probability of depression peaked at around the age of 44. In the US, men were most likely to be unhappiest at 50, while for women the age was 40.

Andrew Oswald, from the University of Warwick, and David Blanchflower, from Dartmouth College in the US, led a study of more than 2 million people from 80 countries to find if happiness was related to age.

I thought there was another study a while back that showed men were their most unhappy in their late 40s. Or maybe it was the same study. Either way the results look to be about the same. Which is interesting to me cuz I’m a 47 year old male.

I think the explanation for the U-shaped happiness curve has to do with the peculiar time of life that are your 40s. You aren’t “old” but your sure aren’t young anymore either. I think right through your 30s you still have some claim on youth. That disappears pretty quickly in your 40s. Some of that is legitimate, like physical changes, and part is societal. Anyone who has hit 40 knows what I mean by the societal aspect. You are perceived as being much older once you cross that line. Now, since this was a study done in many countries, it maybe that societal factors aren’t really that important given that different societies treat age differently. So I don’t know.

There was some commentary on the study that theorized that it is in your 40s that you realize you may not ever achieve your aspirations. I would suggest that, at best, is tied in with the loss of youth. Plus, and maybe this is just me, I’m not sure we all have grand, unattainable aspirations to begin with. Most of us are just trying to get by the best we can and hope for a good weekend. So I’m not sure how prevalent the “loss of aspirations” is really a factor. Also, I think it would be pretty clear long before your 40s that you weren’t going to meet all of your lofty goals. 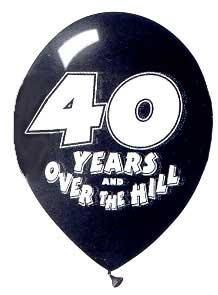 Another factor may be that your 40s can be an age of great burden when you're taking care of your children as well as your parents. This also gives you a view of life in its entirety; your lost youth and the old age that is just around the corner. You have a complete view of life and its slipping away quickly. The infinity of youth is gone. That CAN be depressing.

I am assuming the upturn of the U-curve relates to some degree of acceptance of the fact that you’re getting old. In your 40s you may still be trying to fight that notion. Another part of the emotional upswing might be that you have fewer people depending on you as your parents pass on and your kids grow up.

All of this probably has more to do with my own personal experience, but I’m betting it’s not far off from what a lot of other people are going through in there 40 s as well. That doesn’t mean I’m depressed, but it is kind of a depressing time of life in many ways for the reasons I’ve mentioned.
Posted by Dave at 4:50 PM