See, They Are Doing Something

If this becomes law throughout the land (and not just a couple of states), the Electoral College will become functionally useless. Which would be great!

[Wednesday], the [Illinois] General Assembly passed HB 1685, the "Agreement Among the States to Elect the President by National Popular Vote Act."

…the essence of it is that Illinois should cast all its electoral college votes for the presidential candidate who has won the national popular vote, whether or not that candidate actually carried the popular vote in Illinois.

But, notes Article IV, "This agreement shall take effect (only) when states cumulatively possessing a majority of the electoral votes have enacted this agreement," meaning that we're not unilaterally laying down our blue-state arms.

Only one state, Maryland, has so far signed such a bill into law, but it's in the legislative pipeline in 42 other states. 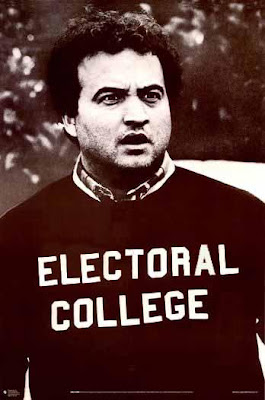 But will we then, finally, abolish the Electoral College or continue pretending it matters and going through the motions? It seems silly to have to work around a problem rather than just fix it. But that's not how the real world works, I guess.
Posted by Dave at 7:23 AM

It's not the way to "end" the Electoral College. I feel it is a horrible idea.

Having said that I really like the photo of John.

I personally have to disagree with the Illinois legislature on this one. In my view the Electoral College is the only way to ensure that less populated states are recognized and not forgotten by the federal government.

If the roughly 500,000 people living in North Dakota do not have a weighted vote then there would be little incentive for the federal government to provide assistance to them. In fact, I fear that the needs and wants of the Northeast and California would be catered to in lieu what would be best for the entire country.

Having said that, I would be in favor of states dividing their electoral college votes based upon the popular vote in each district or region. So instead of Illinois being taken for granted as a purely blue or Texas being taken for granted as a purely red state, politicians would have to campaign in those states to try to get at least some electoral votes.

RM: North Dakota wouldn’t lose representation in Washington (disproportional as it may be). They would still have the same number of representatives and senators. I think we are talking votes here: one person, one vote in national elections. No one campaigns in North Dakota now and if candidates had to scrap for votes everywhere, they might just show up in Fargo. I doubt it though. That part probably won’t change.

Which leads me to another question: Why is it so important that a candidate actually campaign in any particular place? I know WHY they do; it generates (in theory) more votes for them in that area. But in this electronic age, why is it important to the people here that Hillary Clinton or Mitt Romney come to Springfield? 99.9% of residents won’t go see the candidate anyway. And we don’t need to. I can learn much more about Romney or Clinton on the Internet or on CSPAN than I could going to listen to a stump speech. Don’t get me wrong, I like going to see candidates (I have seen all of the presidents in person since LBJ) but it’s not at all a factor in who I vote for.