When in Doubt, Blame the Airport

From the Department of Too Bad But Understandable:

The Vietnam Veterans of America have selected Reno, Nev. for its 2011 national convention, bypassing Springfield and about 30 other cities nationwide, the organization's director of meetings said today.

“It was a tough decision. There were tons of things we liked about Springfield,” where the convention was held in 2007, said Wes Guidry.

Guidry said the veterans liked the city's hospitality, a rejuvenated downtown, the history and meeting space. While a variety of factors went into choice of Reno for the 2011 convention, Guidry said Springfield's bid was hurt by the lack of flights at Abraham Lincoln Capital Airport last summer. 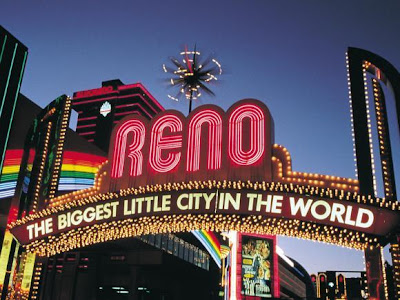 While the air service out of Abraham Lincoln Grand International Capital Airport is somewhat anemic, I can think of a dozen other reasons Reno might be more appealing then Springfield. I mean, if you’re looking for fun beyond the gathering.

Yeah, we got Abe, but once you’ve seen his stuff there’s not much to come back for.
Posted by Dave at 4:53 PM