No, I'm not going to blog about St. Patrick's Day style green beer. Rather, beer that was environmentally friendly. Or at least the bottles were. And the bottles also happened to be green in color. I'm talking about Beer Bricks by Heineken.

The idea was that these bottles, when emptied of their beer contents, could be used as bricks. Unfortunately, the idea really never took off:

...the idea of turning waste into useful products came to life brilliantly in 1963 with the Heineken WOBO (world bottle). Envisioned by beer brewer Alfred Heineken and designed by Dutch architect John Habraken, the “brick that holds beer” was ahead of its ecodesign time, letting beer lovers and builders alike drink and design all in one sitting.

Mr. Heineken’s idea came after a visit to the Caribbean where he saw two problems: beaches littered with bottles and a lack of affordable building materials. The WOBO became his vision to solve both the recycling and housing challenges that he had witnessed on the islands. 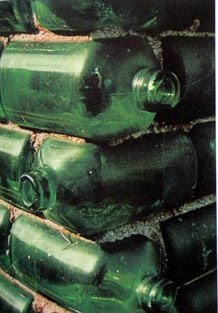 The final WOBO design came in two sizes - 350 and 500 mm versions that were meant to lay horizontally, interlock and layout in the same manner as ‘brick and mortar’ construction. One production run in 1963 yielded 100,000 bottles some of which were used to build a small shed on Mr. Heineken’s estate in Noordwijk, Netherlands. One of the construction challenges “was to find a way in which corners and openings could be made without cutting bottles,” said Mr. Habraken.

Despite the success of the first “world bottle” project, the Heineken brewery didn’t support the WOBO and the idea stalled. 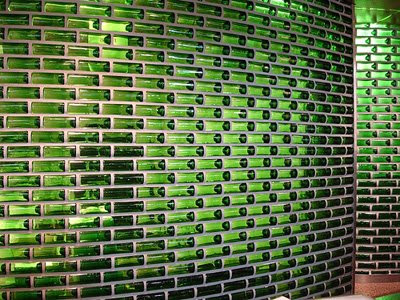 Have a great weekend! And remember to build things with your empties.
Posted by Dave at 6:01 AM