I read a blog post on another blog a few days ago in which the author wrote about an old alarm clock they use which is now the oldest piece of electronics in that person’s home. (I can’t find the post anymore, but you weren’t going to follow the link anyway, were you.) Anyway, that got me wondering what my oldest piece of functional electronics is. Or more precisely, what is the oldest electronic item I still use.

I think it has to be my now deceased great aunt’s television which now resides in my younger daughter’s room. It dates back, I would estimate, to the early to mid 1980s. My great aunt died in the early ‘90s and I know she had it for several years before that (I actually saw it in her condo in Baltimore in 1986). 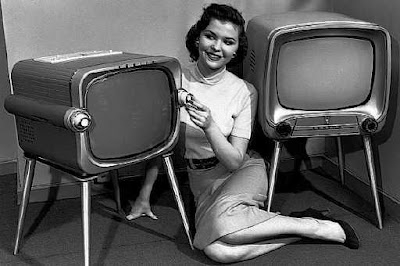 Technically, we haven’t used the TV in a few months because my daughter was abusing the privilege, so we unplugged it and removed the cable line. But I still consider that TV to be on “active duty” and I’m sure it will be used again at some point, probably in a few months when my older daughter goes off to college and we turn her room into a guest room (I know I’m kidding myself thinking she won’t be in that room A LOT over the next ten years).

That TV has made the rounds. First my great aunt used it for many years, them my mother who inherited most of her stuff moved it to Springfield where she used it as a second television for a while. Then she gave it to me when I got divorced in 1997. It was my main TV for a while then when I bought a newer one, it went into my bedroom. Since I’ve been remarried it’s been in a few different bedrooms and now awaits a new assignment.


So, what's your oldest active piece of electronics?
Posted by Dave at 7:21 AM

I still have my first Texas Instruments handheld calculator from 1970.

But do you still use it?

Hehe. Not really. It does work, but a couple of the keys are prone to sticking. It has a bright red LED. Sometimes I just enter 71077345, turn it upside down, and admire the art.