Chris, in comments to the post below, defends Springfield and would stay here even if there was nothing that required it:

Well, I'm actually one of the 4.3 percent (of the skewed unscientific poll anyway) who actually WANTS to stay here. In fact I actually chose to move here a little over 4 years ago. I've very much enjoyed my 4+ years here so far. And I could probably still leave if I wanted. But I don't want to.

Maybe some of it has to do with my experience in the podunk, unfriendly, ill-planned, traffic-and-crime-ridden, and historically ignorant, backwards, and uneducated chessehead capitol of Wisconsin, the place I was forced to grow up in. 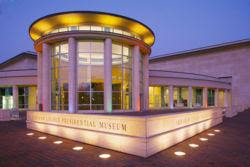 At least Springfield's got Lincoln, older interesting neighborhoods with character, local shops and interesting things in its downtown, history, and events I enjoy. It has a good combination of "big city" and "small town" character. It is easy to get around. There are plenty of things to do, and I still discover more things my former hometown never had all the time. I could list more positive things if I wanted to. Sure there's problems, but they're nothing compared to what I'm used to. (Try living in a city with St. Louis level traffic that is only 1/5 the size of St. Louis, that has curvy, confusing streets and wide boulevards leading nowhere, houses - and people - that all look the same and if you want to shop you can only do so at a big-box chain store or the mall on the edge of the ever sprawling city. And the only thing famous to come out of that damn town is the crappy grunge band Garbage (anybody remember them now?). It's these kind of things keep Springfield's more small townish problems - and its advantages - in perspective for me.)

One of my theories is that there are too many people here who take what we have in
Springfield for granted. I think that we have plenty to be proud of. Having a positive attitude goes a long way. You can have the greenest grass in the world but if you ignore it then the grass "over there" will still seem greener to you. I still find it funny how the ALPM has attracted 1.5 million visitors from all 50 states and all over the world but maybe only 30% of Springfield has visited it. (Yes I've visited it.)

And I have met many people who live here who are happy and say they like living here. So I think the poll is very skewed. And knowing the kinds of people who use the comment board on sj-r.com (that I never read anymore for that reason) I guess I'm not that surprised by the results. It's hard for me to believe there are that many people in the world who are that miserable. It makes me wonder whether they'd be happy no matter where they lived.

So be happy, don't take things for granted so much, and maybe it'll seem better.

You may be the first person I’ve ever heard say they like Springfield more than Madison, Wisconsin. I’ve always liked Madison and thought it had a lot to offer, although I never actually lived there.

Don’t you be saying Garbage is crappy. Their first two discs would probably be in my top whatever number list of all time best albums. One of them would certainly make my top ten. I might even include both but I wouldn’t give any single artist two slots in the top ten.

Anyway, I thought it interesting to hear from someone with a view that opposes almost everyone else’s in regard to our city. Maybe we can start a "my capital city hometown is worse than your capital city hometown" contest here. I hear Jefferson City, Missouri sucks donkeys.
Posted by Dave at 7:16 AM

I was also surprised by Chris'negative feelings about Garbage. I have always been curious though, how the Scottish Shirley Manson hooked up with the rest of the band in Wisconsin. Any ideas?

I thought the rest of his "review" of Springfield was pretty insightful and wonder if it's not the lifers that don't like it as much.

I read somewhere, a long time ago, that she answered an ad that the band had placed looking for a singer. Not sure of the details or even if that's true. Either way, those guys sure got lucky finding her.